It's a new venue for the Samurai tonight.  We're taking over the Slowdown.  The doors open at 7:00 tonight, with the show getting underway at 8:00.  Since we packed the house at the Pizza Shoppe last time, we're really looking forward to seeing if we can keep the momentum going.  Regulars are welcome, new attendees are encouraged.  The show is free, as always, but we're raising money for a good cause.  Help us ring in the new stage and support KIOS, the local public radio affiliate.
Posted by Ephemily at 1:06 PM No comments:

So, so far today I have gone to Biker shops, Tattoo places, Comic shops and a few other places to hang up promotional stuff for dreaming and the art/poker run. all of them were cool, and awesome and thank you all very much.

The one shop I went to who said no? Hobby Lobby. Really. An "art supply shop" said no to promotional material for an art show.

Fuck you people, my Gaelic is weak. A shame for an Irish American to admit, but perhaps Patricia Kennealy-Morrison could be kind enough to give me a word in that epic language for "Holy War." Cause seriously. It's on. All the nerds, and bikers, and tattoo freaks are in for helping art and charity, but a art shop run by "Christians" says no.

If you happen to be part of the local art community. Two words. "Dick Blick" take your money there.

~Dave N
Posted by Ephemily at 1:12 PM No comments: 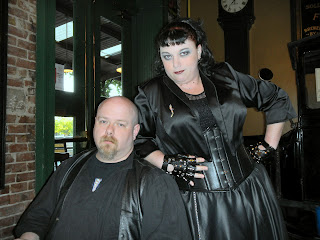 Fellow Samurai, Dave Nesbit and Alysen Ficklen are part of a local group, the Tea and Villain's society.  Once a month, they all dress up in their evil finery and take a local eating establishment by storm.  Raised eyebrows abound because there's an awful lot of black, leather, PVC, studded accessories, and thick eye makeup.  For some silly reason, I had said I couldn't make the original meting, and thus hadn't heard anything more about it.  Silly me, I thought it was a one off and never followed up.

Come to find out, it's a monthly thing.  (Somewhere in here, there's a PMS joke.  I just know it!)  And where have I been?!  Thankfully, I'm now in the know and will be on the list of those informed about future gatherings.  The last meeting was this previous Sunday.  I'd heard about it at the very last moment, so I was under the gun to throw something together.   I was worried.  I mean, the majority of my closet is red or black.  I got this.  The real question was, to rock the eye patch and bitch boots, or not.  Decisions decisions.

Read more »
Posted by Ephemily at 4:53 PM No comments:


Not so long ago, my life used to be sorrow… vast & wide, a chasm of lonely rocky purgatory that I was flung into the moment my Viking was flung from his steed into his own unknown abyss of darkness.  I spent months in a despair, climbing onto various ledges and facades, just to have fickle wild forces push me off.  Endlessly freefalling down, allowing myself to be swept away by forceful rivers of potent tears at the bottom, & so unused to human contact, I forgot how to think & communicate and I alienated everyone as I was alienated from the world I once knew.  I stopped fighting and exploring for egress because I forgot how, or why.  When I traveled I ambled in circles, without direction or purpose, tacitly accepting my lost fate & a purpose forgotten.  I was beaten against the rapids, bruised and bloody, so stoic I stopped feeling.  When I was too tired to struggle & direct myself, I would nearly perish on the craggy outcroppings that changed positions with the seasons.  I began to float on my back as the only means of survival, searching the sky for meaning when I could see it.  Given this slight shift in perspective, while lithely floating down sorrow’s eroding river, in a moment, a flash of more brilliant sunshine than seen previously before, I must have realized that, yes, I could devise a way out, at the point where the chasm was widest.  I began constructing step, by heavy, hard, cold step out of refurbished and corrected logic.  I toiled.  I floundered, discouraged.  I looked to the sky once more & redoubled my efforts towards the clouds only to languish, beset by apathy.   I debated whether or not to give up.  I hadn’t seen the world outside of the canyon for what felt like a lifetime…had it been a lifetime?  I was a different person than before, & the only things I knew were either in the past, or newly pertained to that barren stone depression that cut through my world, dividing it into then, and now.  What’s even out there?  What’s the point of facing more pain on the other side if the world was just the same cruel place that jettisoned me here?  Was it?  Why should I?  Wait, sunshine…I remembered the feelings he gave me, the new lush green warm world he opened up for me…I had hope I could possibly find that landscape again, or even make a new meadow in which to cherish those memories.

Read more »
Posted by Ephemily at 9:50 AM No comments: