My girlfriend and I had a small, low wattage lamp in the living-room of our place in Albany Park. At night we liked to turn off all the lights in the place except for that, and watch terrible terrible television like Bridezillas or The Jersey Shore, while we made fun of it and hoped not to be hit by random gunfire.

Well, things were going quite well with us for a few months... then one day the light burned out. Using her cell phone for light, we scoured the apartment for a replacement bulb, and eventually found one. It wasn't quite designed for this lamp, but we reasoned that the wattage was about right, and it would fit.

It was unfortunately, no ordinary bulb....

a cursed item, forged in the boiler room fires of the GE Electric company by Jack Welch himself, this bulb was somehow circular, fluorescent, blue, and yellow, all at the same time. Capable of emitting a ghostly, humming light to the room that turned your skin the pallor of a zombie, and made all the cat's eyes glow turquoise, this is the bulb that would light our evenings for the next three months.

Named by the dwarves The Lightbulb of Relationshipial Strife, it did its job well...

If you told me today that it was one of Rupert Murdoch's horcruxes, I would not respond with surprise.

If you can imagine the feeling of being with someone you absolutely adore on a five day car trip, you can imagine what it was like to live with this light bulb that I liked to call "Space Bulb."

The light-bulb was tailored for stealth annoyance, and it wasn't fucking around.

Suddenly we were on edge all the time. In the anti-flattering light of the space bulb, we looked like Daniel Clowes characters, and we were always about a single annoyance away from sniping at each other.

The nookie river dried up.

Also, the light was like a fish eye lens. The apartment never looked or felt clean, because it was being lit like the motel where the girl is murdered in CSI: Miami.

"He beat her to death with a lamp because she didn't like the dinner he cooked her..."
"Not the brightest... bulb." 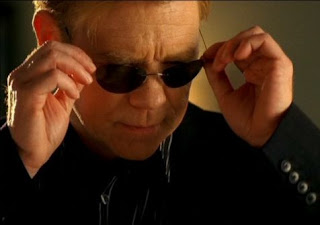 So yeah, it was lit like that. I think we might have even broken up two or three times. Then some time right before she hit me with a frozen leg of lamb and pushed me out the window we had a power surge and it popped.

By that point we'd purchased replacement light-bulbs, but never changed the Eye of Sauron because we are stupid. Really stupid.

Though it burned me as I took it out, I bravely removed the cursed thing. The moment we put in a light bulb made by and meant to be used by humans, color returned to the world. The hum was gone, and we could again hear the sirens, and the shootings, and the men yelling at women from their cars.

Email ThisBlogThis!Share to TwitterShare to FacebookShare to Pinterest
Labels: Comedy